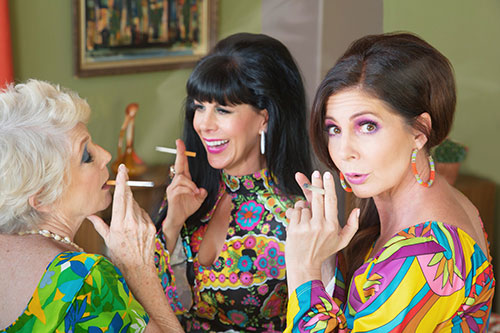 Tobacco and Marijuana Smoke an Irritant to Throat and Lungs

Smoking has health consequences whether you smoke a little or a lot. We all know the health risk of smoking tobacco. These risks increase as we age. What about Marijuana?

First, with tobacco. Even an occasional cigarette can be harmful. A study, by the National Cancer Institute (NCI), shows that people who consistently smoked an average of less than one cigarette per day over their lifetimes had a 64 percent higher risk of earlier death. Those who smoked one to 10 cigarettes a day had an 87 percent greater risk.

Researchers reviewed questionnaires from more than 290,000 older adults and looked at their history of cigarette smoking and cause of death.

Many people, particularly those who are younger, erroneously believe that smoking a few cigarettes a day or a week is fairly safe, says pulmonologist Humberto Choi, MD of the Cleveland Clinic. Dr. Choi, who specializes in thoracic oncology and critical care, did not take part in the study

“These people, unfortunately, may be substantially underestimating the health consequences,” he says.

Regardless of how many cigarettes you smoke each day, it’s important to kick the habit, Dr. Choi says. Light, long-term smokers who quit were able to lower their risk of death – and the younger they were when they quit, the better, the study says.

Like tobacco smoke, marijuana smoke is an irritant to the throat and lungs and can cause a heavy cough during use. It also contains levels of volatile chemicals and tar that are like tobacco smoke, raising concerns about risk for cancer and lung disease.

The active ingredient in marijuana is THC (tetrahydrocannabinol), and many tissues in your body have THC receptors. That means marijuana can have some effect on virtually every organ, and that effect is also virtually unknown. Unlike FDA-approved medications, marijuana has no established dosage, safety or efficacy studies.

“We have limited knowledge about the potential benefit of marijuana, but given the information about potential negative side effects, its use as part of an overall treatment plan for a specific disease should be done under a doctor’s supervision,” says Dr. Steven Insler from the Cleveland Clinic.

There are several documented studies that show that marijuana use is associated with increased heart rate and fluctuations in blood pressure, which may be implicated in developing heart attacks or strokes.

More recently, a study in Journal of the American Heart Association reported that there are potential cardiovascular dangers to young adults using marijuana.

While research is still limited, what we do know appears to show a damaging effect on the cardiovascular system, Dr. Insler says.

Research indicates that cannabis use by older adults is on the rise.  According to data from the annual National Survey of Drug Use and Health (NSDUH), the proportion of adults aged 50 to 64 who reported marijuana use in the past year more than tripled from 2.9% to 9.0%.  Among adults aged 65 or older, the proportion ballooned by a whopping 250 percent.

There is also concern regarding the correlation between marijuana use and mental health issues among older adults. Use of marijuana among those suffering from depression, anxiety and even early dementia could pose additional health related issues.

A new study warns that marijuana use may increase susceptibility to Alzheimer's disease, after finding the drug severely reduces blood flow in an area of the brain affected by the illness.

Researchers suggest marijuana use may increase susceptibility to Alzheimer's by reducing blood flow in the hippocampus.

Published in the Journal of Alzheimer's Disease, the study reveals that individuals with a marijuana use disorder showed reduced blood flow in nearly all areas of the brain, compared with healthy controls.

When blood flow in the brain is reduced, this causes a reduction in the amount of oxygen that reaches brain cells, which can cause brain tissue damage and death.

Even occasional marijuana use can cause structural changes to brain regions related to motivation, emotion and reward according to one study.

As you approach your 50’s you generally have more health issues which come up including high blood pressure, heart issues and cancer. Even occasional use of either tobacco or cannabis may make existing issues a bigger problem later in life.

Many of those issues could not only lead to early death but cause an even great need for Long-Term Care. These health issues also have a big impact of your savings and care costs for long-term care are not covered by health insurance or Medicare.

Some insurance companies will automatically decline your application if you have current marijuana use in your medical records. Tobacco use will prevent you form getting preferred health rates. If you smoke or use marijuana be sure to tell your insurance agent as they will have to review insurance company underwriting guidelines in order to make the best recommendation.

Best advice, quit smoking or don’t start. Don’t fool yourself that occasional use is ok. Your doctor may have ideas on how to make it easier to quit.

We have a free, no-hassle process where we shop all the top insurers for the best rate and coverage based on your unique situation and concerns.